Craving for a crazy and happy future. (LJFW)

I think we’ve all gone a bit mad. I quite like it actually, fits like a glove.

For a brief moment there was a moth flying around the Renaissance chambers of Fužine castle and those long-legged and graceful models, striding down it’s wooden floors. All flustered I guess, poor little thing, the runway was so lit even Adria Airways could find it’s way back home.

There must have been quite a party here, back in 1557, when the last stone was laid. Now, Fužine castle, is home to Museum of Architecture and Design (MAO) which provided a perfect setting for Ljubljana Fashion Week/Fashion Party.

Anyway, as this nocturnal creature made a couple of thousands wing flaps around composed models and disappeared into the night, it left me slightly hypnotized. The whole happening was somehow…romantically captivating. It was like a scene from a movie, the music, clothing, girls and that moth, delicate and mysterious, tied it all together and made it accidentally perfect.

After the show we were hanging around in a bewitching castle courtyard, sipping wine, puffing smoke and most importantly debating on Fashion Week shows. A friend of mine, musician among other things, pointed out an interesting observation.

If during Fashion Week we’re supposed to witness new ideas and paths that may in future lead to trends, why doesn’t that correlate with music as well? Meaning, some designers failed to convey their show holistically. They designed their collection well, but the whole presentation somehow missed the mark…they forgot about the magic moth.

Which really got me thinking, the future part, that is. Poor choices of music or lack of attention to detail is a whole other thing. But are we, fashion designers, meant to be some clairvoyant beings which are able to predict the future? I never considered fashion shows as some sort of a time travel machine. But I guess in a way, we were sitting in a front row of a vision for the future.

And may I say, the future is looking glittery happy, fiercely fur-less, edgy laser-cut and lovingly sustainable. 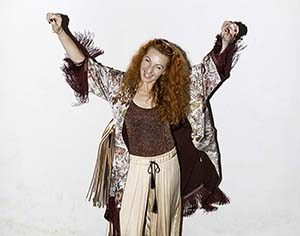 Follow us for more from FW!
ARE YOU A FASHION REBEL? CRAP – Create. React. Alter. Purge.